The HP - Compaq merger proxy fight had been all over the newspapers. It started off bad and progressively got worse. She said / he said / are too / are not - God, what a frightful descent from a Fortune 500 "most admired company" to a tabloid spitting match.

The slide into disarray started long before Carly Fiorina took the helm. I was there, I know. Once HP had stopped the go-go headcount growth of the 80's senior management started to worry about how much they had to manage instead of what would be best for the company and its customers. Political infighting took over. Every presentation to the Vice President level had to include a spin on how it would actually keep expense dollars within the span of control of that  particular VP. If your idea called for shifting expenses to another area of HP, it didn't have a chance. Famous for local division autonomy, HP was devolving into a group of decoupled fiefdoms. It was so sad to watch. I don't say that every Vice President and General Manager worked this way, but enough of them did to gum up the whole works. The HP plane was starting to nose over.

I left HP in 1999, just a few days shy of my 19-year anniversary with the company. I always expected to be an HPer for life. And, in some ways, I am. I still carry on the traditions of the "old" HP, the one I joined in 1980. A belief that good people, given good leadership, will do great things. We try to emulate that at our company. What I left was not the HP I joined. I know I had changed, and I know HP had too. When the opportunity came to leave I was stunned by how fast I made the decision to leave. I was also astounded by how good I felt when I turned in my badge. So sad.

Carly was brought in to get HP going again. With the hot Internet driven economy HP was bleeding talent every day. One of my friends left a year after I did. He had some problems with his final paycheck and had a hell of a time getting in touch with the centralized North America Human Resources department. When he at last got some attention the person apologized, "Sorry, we've had almost 1,500 voluntary terminations this month." Holly cow! That would be about 4% of the entire HP world wide workforce. In just one month. They must have been going bonkers. Carly had her work cut out for her.

Unfortunately, Carly didn't play to the inside crowd. She focused externally and I think she got blindsided by some of her executive staff.  An early initiative didn't come off as well as she hoped and some of the senior management were whispering, "I knew it wasn't going to work." This from an executive who was responsible for a part of the implementation? If they knew it wasn't going to work they should have threatened to quit. Show some backbone. I wonder if malicious compliance perhaps had a hand in the failure. In any case, Carly didn't fire these folks so now she is responsible for them. 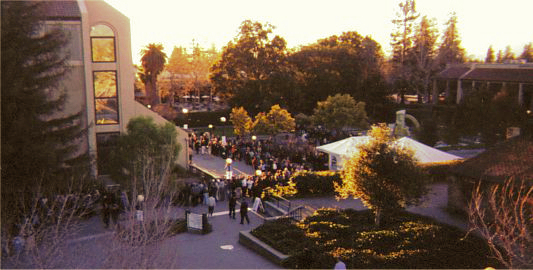 With all this background behind me I wanted to be at the center of the fireworks. Ground Zero. The shareholder's meeting where the vote would be called. Up at 6:00 and at DeAnza by 6:30AM I was already late! You'll see in the picture that there were already about 500 people in line. Gadzooks. I stood at this vantage point for a while. The meeting didn't start until 8:30 and I expected to be one of the first in line. I guess not!

From the HP Alumni email group I had heard some hubbub about wearing green, bringing signs, chanting, etc, all to agitate against the merger. (For the record, I voted my proxy early and in favor of the merger. Why? That could be a whole other discourse.) What I found was a quite, polite, regular HP crowd. Very nice people, these HP folk. There was a little green here and there. Many people talking among themselves against the merger. But no chanting, no signs. 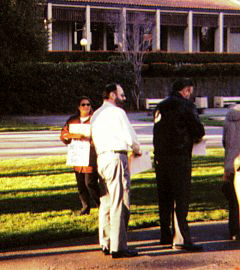 The media was all over, and not too happy. They were clearly ready for a news event, but they had to make most of it up. The news crews interviewed a ton of people in line, but there just wasn't a story brewing. While an interview was going on, the line behind the person just stood there, politely waiting for the interview to end so that they could all move forward again. You have to love HP people!

There were two protesters with sandwich boards from the French Telecom Workers Union - I think. They were passing out fliers to the crowd. One of the signs said, "what next? Dell and Sun?" I thought: possibly. They were not getting much attention. People took the fliers, but I think in this country we are too bombarded with street side fliers. Bad choice for this crowd. Anyway, these were mostly people against the merger anyway. Preaching to the choir?

By 8AM the initial 500 people were all inside and the line was only a little bit shorter. People kept showing up and getting into line. I saw several old friends (a few are pictured below) and many that I recognized but didn't really know. Along about this time a snare drum appears. Brrrrrrump,  brrrrrrump, brrrup, bup, bup. A single guy, looking a bit unwashed and a little seedy is walking up beating a march on the drum. He has a solid green sheet thrown over his shoulders. Oh, the media loved him. The cameras swarmed and he got interviewed by all of them. Close up of the drum, shot of the crowd from over his shoulder. At last there was something newsworthy going on.

Me? I wandered the crowd. I sat. I watched. Changed vantage point and watched again. I understand that I meandered behind an MSNBC live report one time. I didn't even know I'd done it. I never did go into the auditorium. There wasn't enough tension in the crowd to make the meeting explosive.

Later I heard from others that there were a few standing ovations. Carly got booed once, but even the boos were not the Earth shattering kind. I guess I should have expected the low key approach. HP picks nice people, and nice people play by the rules. They vote; they don't hiss. They don't jump up on their chairs and scream. I really like working with HP people.

A few friends from the meeting:

Jim Schrempp is a sometimes freelance writer (only Vanity Press will publish his work) living in Saratoga, California. His writings have appeared on numerous pages on his own web site. The opinions expressed in this piece are those of the writer and do not necessarily represent those of anyone else (although Jim wishes more people shared his opinions)