The remodel is done at last! 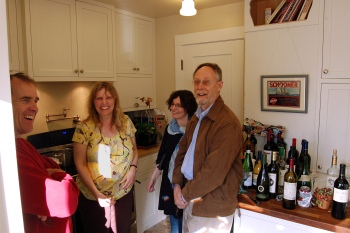 The new kitchen, she is proud of it!

Back to my home page

Planning the remodel started 18 months ago. They broke ground (or walls) last June. It was supposed to be done by October. Now it is May and it is done - almost. A few little things still need to be handled, but they are just little things.

Being so close to the end, we held the promised open house to show it all off.  It started with Jeanne flying in from Vegas on Thursday. Then Friday we spent an hour in CostCo and several hours cleaning the place up and putting furniture in place. Whew. We were exhausted.

Saturday morning we made the major food. Jeanne made her baked pasta. It was a tremendous hit. She made gazpacho from one of my recipes. It was ice cold and delicious. I made chili colorado, which came out a bit spicy, but I loved it.

We tried to invite everyone we know and over the day about 90 people came by. Wow, the place was crowded. If you didn't get an invitation, it was a complete oversight on our part. Call us up and let's do a dinner together.

My new iPad made an appearance and you couldn't keep people from touching it. It can be mesmerizing, but I didn't realize how seductive it would be. And so easy even for those who haven't used iPhones before. Young and old were able to pick it up and start using it. I was surprised to see the collaboration it encouraged. Several times groups of three or four would be using it at the same time.