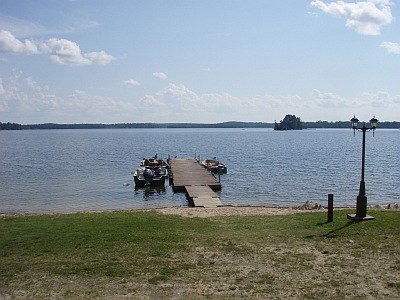 Back to my home page

August 2007 - Kim and Pete have invited me along for the family walleye trip this year. We meant to go last summer but then the beautiful Lidiya came along and we delayed a year. Now it's "game on."

I flew to Winnipeg and spent the first day with Kim and Peter. This was the first time I'd met Lidiya, and she is precious. She's sweet, intelligent, and very social for a four year old. Kim and Pete had told her about me, and when I showed up we were already good friends. We were up the next day and after a Tim Horton's run we were on our way to Clark's Camp, just 20 minutes on a dirt road from Vermilion Bay. We had four cars as Kim and Lidiya were coming home a day early, and two other friends were also doing split duty. We played leapfrog along the way and at every stop we changed cars. At the lunch stop I almost got to try poutine, a mess o' fries with cheese curds and gravy... Our last rendezvous was at the statue of the pointing man; Kim and I were chatting so much that we drove right by it. Whoops.

At Clark's we met up with Pete's parents, and his brother and wife. We were 10 in total.

Clark's camp is a sweet little hideaway on one of the Indian Chain lakes. These 8 shallow glacial lakes were dammed at one end to raise the lake level a few feet. Now an aluminum boat can navigate the four foot deep channels connecting each lake.

The first night out I grabbed a 12 inch walleye while trolling around the bend of a nearby island. The fish fight just enough to be fun to reel in. I slept well that night knowing that the skunk was off my back this trip.

The pattern for our days was to be up and fishing from 8am until 10. Then rest until we go out again from 2pm to 5pm. Dinner at camp, then back on the lake from 7pm-9pm. Then speedboat home from where ever we end up.

The second day was dismal fishing. Except for my first blood, the trolling did no good. We were lucky enough to get a batch of pity fish from the local expert. And he passed on advice that this lake was made for jigging, not trolling. We thanked him, ate his fish, and trolled the next day anyway - again catching nothing. In the afternoon of our third day he brought us a handful of jigs and we decided to try it out. What do you know, we caught a couple. Not many, but enough.

That night Larry and Pete smooth talked the pro into taking us out the next morning. Bright and early we jumped in our boats and followed him. About 15 minutes later we've slowed to a putter while he runs his boat in slow circles, eye on his depth gauge. He tosses over a buoy and yells to us, "you fish right here." And to the other boat, "Follow me."

We hemmed and hawed a bit before finally tossing the anchor over the side and sitting down for some jigging with minnows. Almost immediately upon hitting bottom we started pulling up walleye. Man, that felt good. At last we were catching. And catching a lot.

From then on our daily routine was altered. First we'd head out in the boats talking about good spots to try. We'd drop a line somewhere, fish for an hour, then look at each other and slyly say, "why don't we go to the hot spot again?" We'd zoom over there and shamelessly fish like we were old pros. Oh the fishing was great! I must have brought in 45 fish that week. We never kept anything under 12 inches and several times we were hunting only for larger ones.

Each night we'd filet our fish. The biggest went into the freezer to take home, while the smaller ones were pan fried. Walleye is delicious fish. Susan had the duty roster planned out and we each took our turns at the dinner stove and clean up. Once lunch I steamed a walleye. It was very tasty, but scaling it was too much work. I should have tried steaming a filet.

The only problem I really had all week was with the flies. At Clark's we had use of a large screened gazebo. We ate and played cribbage there. However, on the boats these damn flies would hang out on my socks and every once in a while - wham! They'd bite hard. Those wounds took three days at home to finally disappear. Next time I'm bringing spats. Seriously, I am.

Fishing was good, but we really enjoyed lazing around the cabins too. There were plenty of seats in the sun. I often sat inside, snoozing if I could.

We took a break an motored the boats all the way to the end of the four lakes on one side of the chain. We meandered our way along, seeing the sights and breathing the fresh air.

At the very end we found the inlet to the lake. A dead end and a waterfall from the next lake up in elevation. The water was pouring into the lake, keeping it all flooded. We came up close for a look at the babbling brook of a fall. Larry took note of the portage to one side and spoke wistfully of carrying his canoe. Then we turned around and powered our way back to Clark's Camp. I was surprised to find that it took us over 45 minutes to get back to camp traveling at full speed. There is a lot of shoreline to explore here.

One day we ventured to fish further out. I was with Susan and Dave. Susan said, "let's try here", off the point of a small island. We set the anchor with some work. I tossed out a line and before it sank 5 feet I had a monster of a hit. A real pole bending, you caught a rock, type feeling. But it moved! I kept reeling and Dave stood ready with the net. After some "wow"s, I brought a 33 inch pike over the gunnels. It was one ugly, slimy fish. It just oozed some kind of spit from under every scale. A quick photo, measurement, and we flipped it back over the side. It spent a moment recovering and was off to chew on more walleye. Pete later told us that pike have been found to have whole seagulls in their guts.

The next day he took me to my first two geocaches and toured me around town. I saw a lot of Winnipeg. That evening we geeked out in front of our computers trading URLs and stories of the web. Eventually Kim and Lidiya were back. On Sunday we went to their local level A baseball team and had a superb day at the park. As much fun as the San Jose Giants, but with more food choices. On my last day Kim and Lidiya took me eating and shopping and finally to the airport.

I really enjoyed their hospitality, the family fishing trip was a gas, and Lidiya was by far the highlight of my trip. I am so looking forward to our next meet up.